Will We Please Be Nice To Our Children, Please? 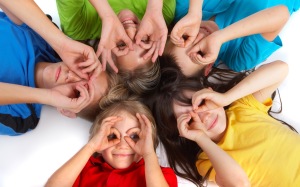 When I picked up Plumster from school last night, she said to me, “Mommy, I am very worried.”  Alarmed, I stopped our track, bent down, looked her in the eye and asked her, “Why?  Why are you worried?  What are you worried about?”

“Well, I am worried that I haven’t been as good as I could be this year, and that Santa is not going to bring me my present this year.  I mean, I was good, but I wasn’t as good as I was last year.”

I asked her why she thought she was not as good as she could be.  The only example she could think of was the time when she washed her newly created Build-A-Bear after I specifically told her not to.  That was it!  Well, I could have probably thought of more, like when she did not practice piano daily when she was supposed to; or not cleaning her room or at the very least, keeping it tidy.  But no, those are just her being a normal seven-year-old kid.  She makes up for her daily practice in creative ways, like using it as a bedtime stalling technique… at 9:30pm.  She has a different standard and vision of how her room should be.  All in all, she is a superstar kid in my book.

What then, was she using as a measuring stick  for her not being as good as last year.  After much prodding, the short answer was her teacher’s perception of her as a student.  This was my Aha! moment.  What she was doing, in fact, was that she was actually comparing the teaching style between her second grade and first grade teacher!

Her first grade teacher used two reward systems: individual reward system where each child can work towards a “star” for various good behaviors.  Once a child earns a certain number of stars, they get to choose a small prize from a goody bag.  Nothing major in the bag; I saw it once, there were pencils, erasers, little stickers.  There was also a class reward system where the entire class work towards earning an in-class movie and popcorn at the end of the year.  Being a chatter box, Plumster wouldn’t be what teacher might consider a perfect model student.  But through her good grades and willingness to help others, she did get her hands in the reward goody bag a few times last year.  In this reward system, children received positive feedbacks for their good behavior, which enticed them to behave well, so on and so forth, thus creating a positive feedback loop.  Last year, her class had the highest parental participation, highest attendance rate, highest rate of donation (100%), and I suspect, highest students and parents satisfaction rate.  During winter break, we received a hand-written thank you note from her teacher for a small holiday gift card that we gave her.  Her first grade teacher was thinking about her students and thanking them in hand-written notes complete with a hand-written brain teaser while visiting family, in Hawaii.

This year, the second grade teachers were told to do away with the goody bag.  Instead, students were punished for misbehaving.  There was a girl who was threatened to have her “Superstar” status taken away if she talks to her friend during class.  Once Plumster was threatened to be sent to the principal’s office for giggling with her friend in class.

For giggling in class!

It was the first week of their second grade, they were working on an essay on what they are doing differently now that they are second graders.  They could write about any new friends they made as well.  Being an avid reader, Plum always had lots to say, but was somehow “having a writer’s block” that day.  So she asked her neighobring friend to give her some ideas.  Her friend told her to write that he was her new friend this year.  “But I already know you, silly!”  Her friend helpfully suggested, “Well, you can pretend that you didn’t know me and that we just met!”  They giggled at the thought of pretending they just met.  For that, they got a warning to be sent to the principal’s office.  I understand that teachers have 20+ students to manage, and sometimes they just have to use whatever quick, efficient technique that comes to mind to solve the short term problem at hand.  I asked Plum what she eventually wrote for her essay.  She told me she wrote about the rules of her new class with her new teacher, without a mark of sarcasm, mind you.

I actually had a talk with Ms Y about this, as Plum was distraught at having her teacher to even think that she is a trouble maker.  “Oh, but I would never send her to the principal’s office for that. I think she is really good in general.  I just said that so they’d stop talking in class.  And so far, they haven’t been”, she said confidently.

Effective but how short-sighted!  By constantly threatening students with heavy-handed punishments, Ms Y is essentially telling her students that she does not trust them to behave well.  “Do as you are told, or else!”  They will be punished for every deviant deed, be it large or small.  Off to principal’s office you go!  Off your Superstar honor student status!  Children were reinforced throughout the year that any small deviation from the “good behavior pattern”, and you are on the bad list.  There was nothing to be gained to be good.  I suppose supporters for this method could argue that students should know that good behavior is EXPECTED of them, so why should they be rewarded for something they are SUPPOSED to do.

However, I would argue that by constant threats of punishments, one creates a negative feedback loop.  The nurturing environment is gone.  In fact, their integrity is being questioned, constantly.  By comparison, the reward system worked much more effectively in the long run.  For rewards, I am not talking about toys or electronics or gadgets.  It doesn’t have to be something that you spend money on.  I am not talking about empty praises either.  By reward, I’m talking about positive feedbacks, be it a star sticker; a heart-felt “thank you”, said while looking into their eyes; a chance to let them feel appreciated and validated.  Reward could be something grand, like earning a movie with popcorn for the entire class to enjoy at the end of the year, during class.  In my house, Plum’s reward sometimes is as simple as her getting 10 more minutes of uninterrupted reading time.By acknowledging something great or special that our children did, we are letting them know that they are not being taken for granted, that we value their positive behavior.

I am not saying not to punish our children at all.  There are obvious misbehaving deeds that need to be punished.  Like running away from parents and into the street, that deserves a quick severe punishment to nip it in the bud for safety reasons.  What I am saying is let’s create an environment for our children where they WANT to behave well, and not one where they behave well BECAUSE they DON’T WANT to be punished.  The mentality is absolutely different.  I am not saying don’t have high expectations for our children.  No, quite the opposite.  What I am saying is do expect the highest from your children, expect them to behave well, to work hard, to study hard, because they want to, without the fear of being otherwise punished.

We all know that nobody is perfect.  So let’s stop the negative nagging reminder for all people: our children, our spouse, our colleagues, our neighbors, our frineds, our family.  Let’s acknowledge and appreciate the things they do for us.  Let’s look to the positives in life.  Let’s create a warm glow, starting from our immediate circles.  Soon, we might even be able to see the positive ripple effect.    Let’s please be nice to each other, please?

I am a mother, a wife, a physician, and a scientist. This is a life style blog about recipe ideas to try out; fun events to check out; being a career woman; health concerns; parenting doubts and triumph; and all the silly and loving moments in between.
View all posts by Monki →
This entry was posted in HOME, KIDS, MUSING, PARENTING and tagged child behavior, child psychology, helicopter parenting, meditation, Musing, parenting styles, teaching style. Bookmark the permalink.